Book
your room at binissaida.com
Always the best price 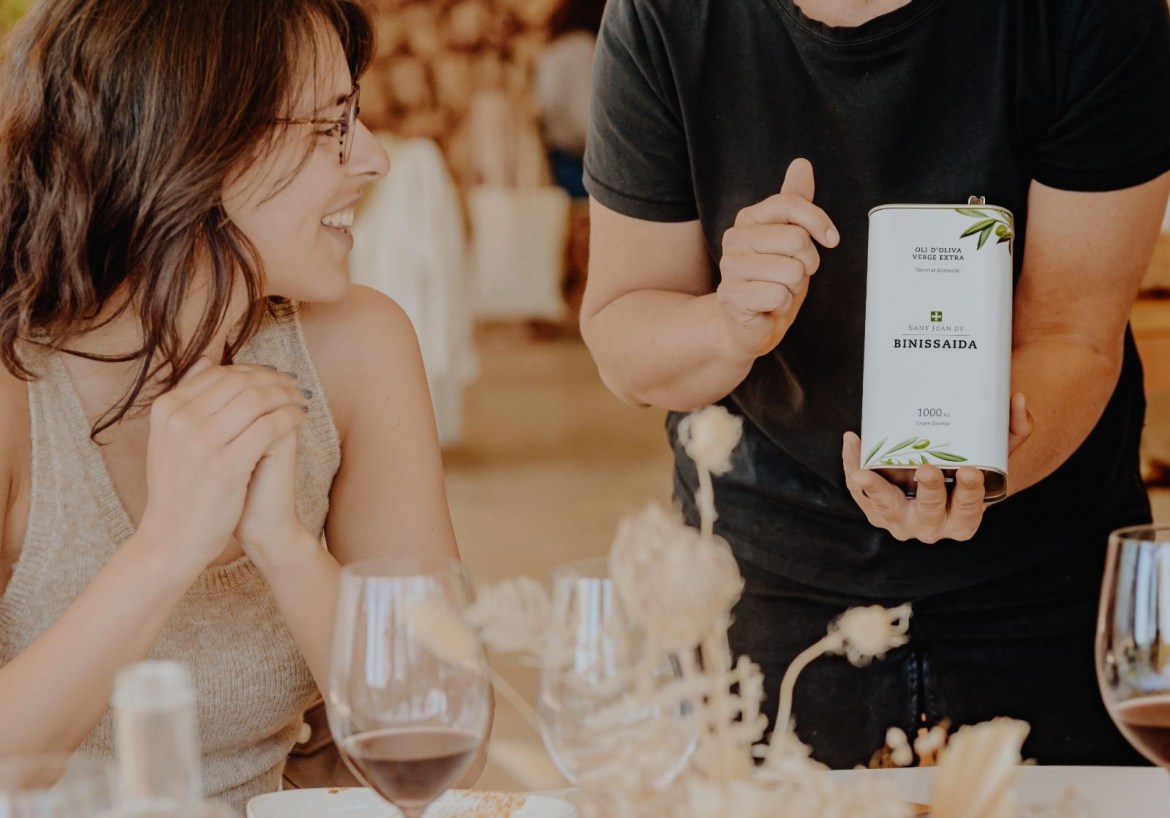 The second edition of Binissaida Gastronómica, but above all, the award obtained at the "London Olive Oil Competition Awards", indicates that this is being our gastronomic year.

That at home we have a treasure in the form of an olive plantation, is something we have known for a long time. That they confirm it to us in an international contest, in which the quality of the olive oil that we produce in Sant Joan de Binissaida was valued, is the confirmation of that certainty. For this reason, we could not be happier when, last June, the jury of the "London Olive Oil Competition Awards" awarded our oil the silver medal in the quality category.

The production of olive oil is one of the pillars of the global project of Sant Joan de Binissaida. More than 1,200 producing trees are those that fulfill the purpose of returning to the root of the oil, in our eagerness to provide the farm with a space in which to develop an agricultural project in line with the values ​​of the Biosphere Reserve that Menorca holds. 664 trees of the arbequina variety and 660 of the koroneiki variety stand a few meters from the main building. And, throughout the year, this space is cared for, watered and protected with sustainable practices, both in the use of natural resources such as water; as in the optimal maintenance of the health of olive trees. It is for this reason that in 2021, we obtained the qualification of ecological exploitation by the Autonomous Community.

Obtaining a silver award in an international competition such as the one in London, in which the best oil producers in the world compete, is the icing on the cake of the year in which Menorca is a European Region of Gastronomy. And Sant Joan de Binissaida contributes to that title with a product of the land such as oil.

Shortly before obtaining the silver medal for our oil, we had another little joy. This time, between the walls of Sant Joan de Binissaida. And it is that, for the second year, we were able to celebrate the Gastronomic Binissaida day, with which we want to link the recovery of our land with haute cuisine.

On this occasion we have the collaboration of Jordi Vilà, chef of the alkimia and alkostat restaurants and National Gastronomy Award 2021. Vilà elaborated a perfect speech between local product and culinary tradition. And he delved into the past, present and future of Catalan cuisine, in an exploration of the limits of this gastronomy, which, starting from tradition, also opens up to the most radical contemporaneity. He did it accompanied by the local Menorcan product, especially fresh fish and shellfish. But also of other elements that are very present in the Mediterranean culture, such as olive oil, which we procure from the farm.

However, to relive the experience that was our II Gastronomic Binissaida, we recommend that you read José Carlos Capel, in his Gastronotas. It is difficult to recover the smells and flavors if they have not been felt first hand, but the journalist has given us an idea of ​​how Vilà was handled in the kitchen of Sant Joan de Binissaida.

BOOK ON OUR WEB AND BENEFIT FROM GREAT ADVANTAGES

Free cancellation up to 7 days before your arrival

Book on our website. Secure and encrypted data transfer

Pay at the hotel

Without any charge until your arrival at the hotel

Book a table
In our restaurant

Where can I find this information?